We are delighted to announce that Prima’s Managing Director, Ian Buckley has been awarded The Young Stationers’ Award.
The prize was announced at the annual Young Stationers’ Dinner at Stationers Hall on Monday 24th July, where journalist, author and political commentator Simon Heffer, spoke about his career in journalism to the assembled guests, before the award was made.
Ian has worked at Prima Software for 11 years and in that time has risen from customer account manager to Managing Director. He is now responsible for the commercial operation.
Ian was commended by the judging panel for displaying commercial vision, creativity, attention to detail and determination throughout his career which has allowed him to contribute to the growth of his organisation. Throughout his career he has assumed responsibility early and managed a range of large and complex projects, such as the launch of our pioneering new cloud based solution. According to the many endorsements from industry that Ian received as part of his nomination he has a first-rate, positive attitude combined with a passion and enthusiasm for the industry that regularly draws praise from suppliers and customers alike.
This year’s judging panel, made up of senior professionals from across the Livery’s trades and previous winners of the prize, was chaired by Professor Tim Connell, a Court Assistant of the Stationers’ Company and Professor Emeritus at City, University of London. Commenting on the awarding of the prize, he said:
“The judges were very impressed with Ian’s achievements and ability to work his way up within an organisation, making the most of the opportunities to assume responsibility that came his way. He is clearly a very determined, hardworking man but also displays the passion and enthusiasm needed to successfully lead a team and drive an organisation’s strategy forward.  He is a very worthy winner and a fine example to young people across Stationers’ trades of what can be achieved.”
Ian Buckley commented: “I’m delighted to have won this prestigious award from the livery company of the industry in which I’ve worked for 11 years and which has given me so much.  I’d like to thank the whole team at Prima for their help and support and for the board for entrusting me with such responsibility.”
The Young Stationers’ Award sets out to recognise outstanding talent and achievement among those under 40 in a range of qualifying professions and sectors across the communications and content industries. Past winners are Ella Kahn and Bryony Woods, founders of Diamond Kahn & Woods Literary Agency; Angela Clarke, novelist, playwright, and columnist; and Katie Glass, of the Sunday Times.
The trophy was kindly donated by the Worshipful Company of Pewterers to reflect the close ties between the two liveries.
The other shortlisted candidates for the 2017 award were: 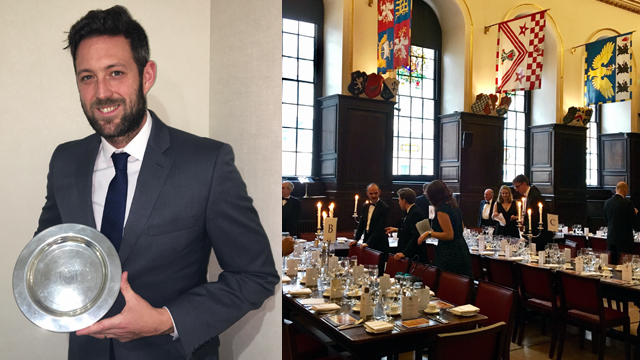